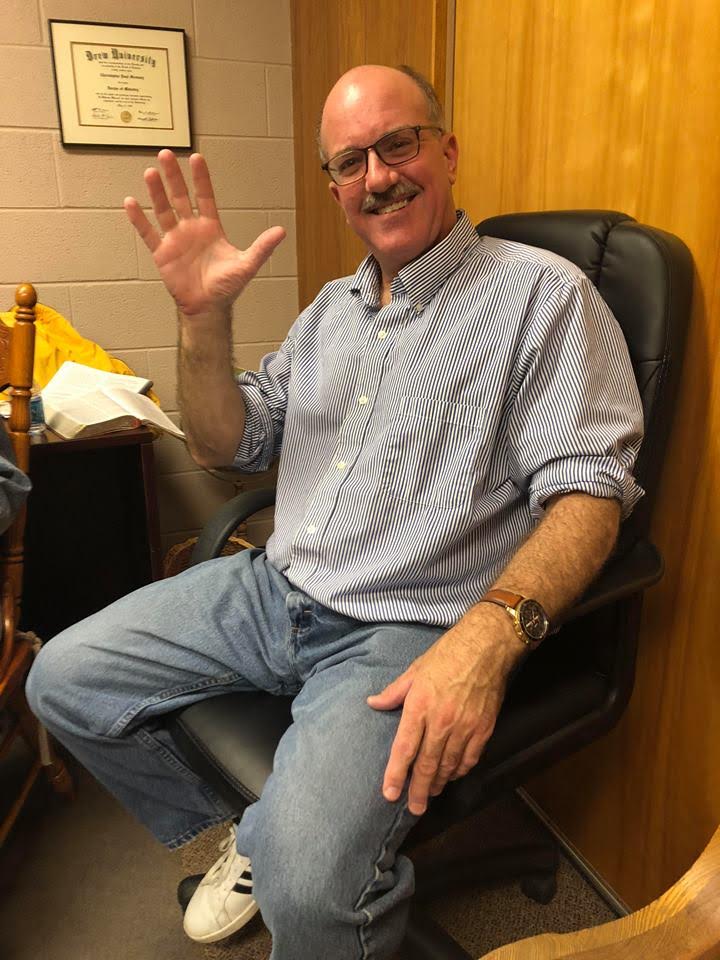 After more than 20 years as chaplain at Adrian College, Pastor Chris Momany will be stepping down and heading west. Momany, an AC alum, announced March 16 that he is marrying his high school sweetheart in August and moving to Benton Harbor, Michigan. After the death of his first wife, Kim, almost three years ago, Momany has been fortunate to find a second chance at love. They will be moving the Benton Harbor to care for both his parents and his fiancee’s mother.

Momany first came to Adrian as a senior in high school, already committed to another college in Tennessee. While returning home from a family vacation, his mother suggested that they visit Adrian College, just to see what the campus was like. After this visit, Pastor Momany fell in love. Upon his return home, he did what most students do in this situation: he made a pro-con list. Once the list was created, his decision was clear. He decided to change his plan of action and attend classes at AC in the fall. Here, he received his Bachelor of Arts degree in history and philosophy. After graduating from Adrian, Momany attended Princeton Theological Seminary to receive his Master’s Degree and Drew University for a doctorate.

While in high school, Momany’s girlfriend, Liz, (now fiancee) told him that he would make a great pastor. While going through his education, he was unsure if this was the correct path. It was during his junior year at Adrian that he decided that becoming a pastor was what he was called to do. He previously served in two churches in central Michigan after he graduated from Drew University. A few years later, the job of chaplain opened at Adrian College, and Momany decided to apply. He said had such good memories of being a student at AC and had learned about the rich religious history of the campus. He decided to return to his alma mater as their chaplain.

During his time at Adrian, Pastor Momany has taught a variety of classes in the department of philosophy and religion. His favorite class to teach is Christian Social Ethics, which is offered every fall semester. This class attracts many different students, from freshmen interested in learning about ethics to seniors needing to fill their distribution. This allows for a wider range of discussion on various issues.

Momany has also been involved with the on-campus group “Not for Sale.” This group works together to raise awareness for the human trafficking crisis and bring an end to modern-day slavery. The group started at Adrian College in 2007 after the release of the book of the same title by Dr. David Batstone. In 2009, the Not for Sale organization held a training academy at the college to help further combat these trafficking issues. Today, Adrian College hosts the only college group involved with this organization. Not for Sale works to raise funds for homes of victims, awareness of the human trafficking problem, and advocacy for those affected.

In addition to all of this work, Pastor Momany has also published two books. He comes from the Holiness Movement of the United Methodist church, which encourages its followers to live a “holy” life. His first book, “Doing Good: A Grace-Filled Approach to Holiness,” focuses on this idea of using holiness as love. His second book, “For Each and For All,” describes the ethics of Adrian College’s first president, Asa Mahan. It discusses how these ethics and movements were used in the anti-slavery movement prior to the Civil War.

“It’s an emphasis on being a loving person,” Momany said. “You don’t have to be a part of my religious group.”

Many students and faculty have been saddened by the news of Pastor Momany’s resignation. He has had an incredible impact on this campus and inspires so many people. His legacy will continue to reach all students who walk this campus after him.