A bulldog’s bark should never be underestimated. Battle Creek, Michigan heard a bark and felt the bite from Adrian College Women’s Golf team during the MIAA Fall Final. This aggression shocked the competition and brought victory to the program for the first time in thirty-one years.

“The team’s performance was nothing short of historic,” Coach Brent Greenwood said.

At the end of last year, great potential was shown, but this effort would land them just short of a conference win. Fundamentally, Adrian’s women “could never put it all together each week,” Coach Greenwood said.

The Bulldogs saw success right after the first match of the year, and consistency allowed them to hold the lead. “We kept gaining strokes on the other teams in the conference and [we] put ourselves in a good spot leading up to the Fall Final,” said Sophomore Riley Kleck. Adrian held a 12-stroke lead on the second-place team, Saint Mary’s College.

Preparation is nothing to look past when it comes to winning a conference tournament. Sophomore Olivia Ohmer was declared First Team All-MIAA honors and MIAA Player of the Year. Titles like these are not easy to achieve. “The night before, I stayed at our home course until dark practicing putting drills,” Ohmer said.

While physical preparation is essential, the mental game can also be linked to this accomplishment. Tying the physical and mental components together, these women played as they would any other day. Last year the team “had plenty of physical skills, but were lacking in their thought processes,” Coach Greenwood said. 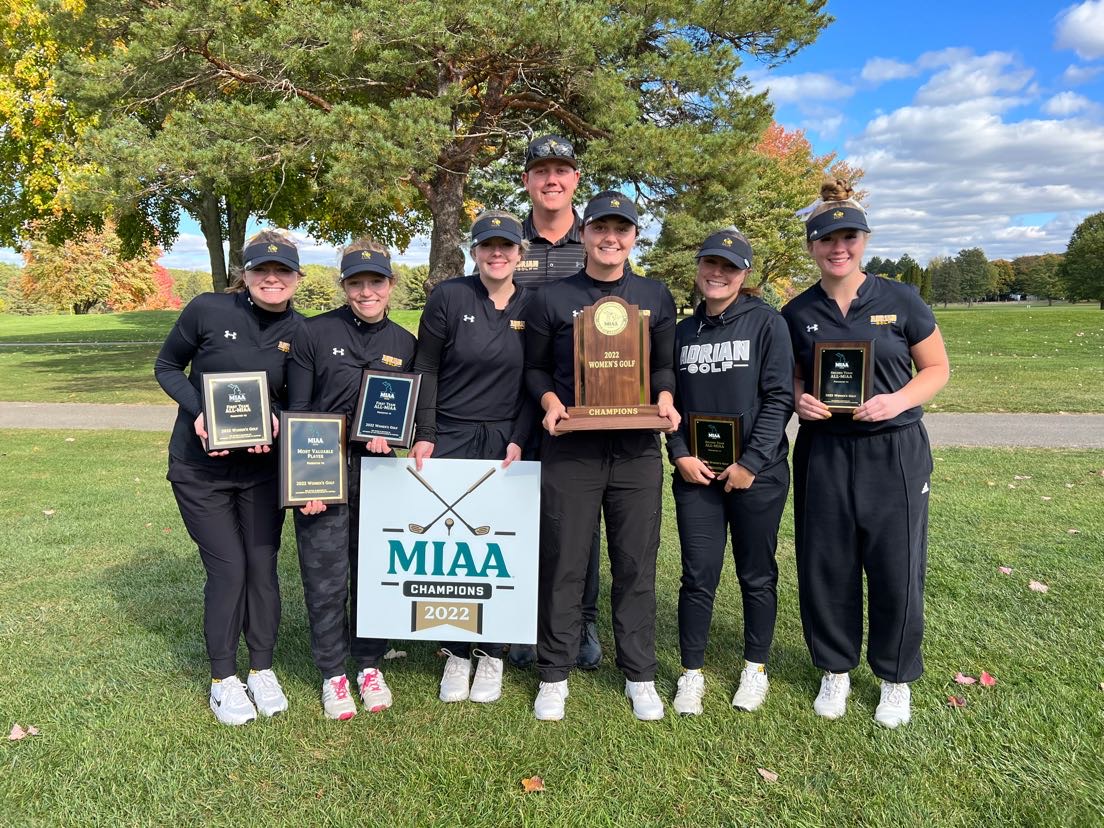 “I spent the entire summer practicing in amateur events and working on strength and mental performance training,” Ohmer said. The team had to look past their nervous tendencies and play relaxed, or as Ohmer said, “with a Zen mind.”

Ohmer’s overall performance was outstanding, shooting a 73 on Friday and an 80 on Saturday, but the victory showed ambition from the entire team. Kleck shot 167 over the two days naming her First Team All-MIAA Honors. Lauren Reed and Taylor Ross finished the tournament with 164 and 163, respectively. These scores declared them Second Team All-MIAA.

Surrounded by friends, family, teammates, and coaches, the six golfers hoisted their newly claimed trophy high into the sky. Thirty-one years of perfecting the bark, the Women’s Golf team proved to be the loudest and most dedicated in the conference. Next up, is the MIAA Automatic Qualifier, where this team will continue their run and compare with similar teams nationwide.