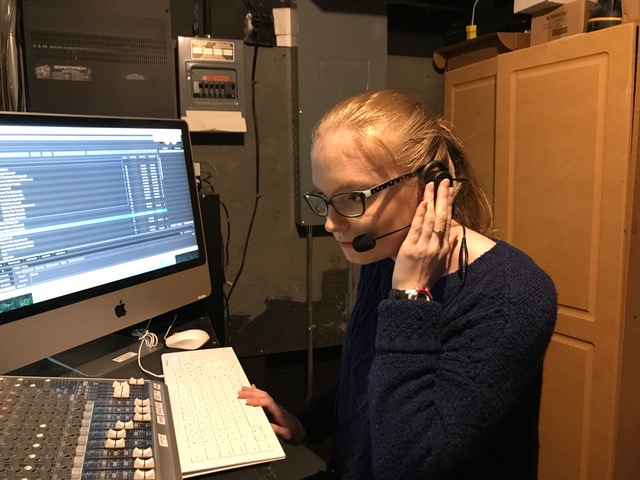 Many students come to Adrian from near and far. Some study science, some study business but very few study theater, and the ones that do turn out to lead very successful careers. Alumni Alona Shewich is one of those success stories. Shewich graduated from AC Spring of 2018 with a Bachelor’s in theatre.

When Shewich came to AC, one piece of useful information that spoke out to her during orientation helped her during her journey here.

“They passed out a piece of paper to every student that said ‘intrinsic worth’ on it,” she said, “I’d never heard the term before, but I’d always loved and believed in the concept that everyone has value simply by existing. Hearing someone speak about that concept and talking about how it was a tenet of the school, it felt like a sign I’d definitely chosen the right college for me, like I’d found a place that held the same values that I did.”

When Shewich was on campus she wasted no time making the most of her experiences.

“I was involved with every main-stage and student-produced theatre production during my four years at Adrian, as well as a number of student-produced events like “Which Bulldog’s Line Is It Anyway?” and the haunted house held in Downs Hall for Halloween. I was a member of Alpha Sigma Alpha, where I held the positions of Vice President of Programming and Ritual and Vice President of Membership Education. I was also a member of the theatre fraternity, Theta Alpha Phi, where I was the Secretary and Historian. I worked in the Admissions office all four years as a Student Ambassador. I also did an internship at Theatre Nova in Ann Arbor, MI, a theater I’d worked at as an assistant stage manager every summer since my sophomore year.”

These experiences have benefited Shewich very well. In fact, right after college she landed a job and has been working ever since. In her time, she has moved around a significant amount and has built lasting connections with those whom she meets. After graduation, she worked on a [premier event for the PS4 game Detroit Become Human, Stage managed with members of the British theatre company Les Enfants Terrible as well as team members local to the Detroit area. Al little later in the summer, and even got a job as the resident stage manager at Theatre Nova.

This all paid off when she moved to New York.

“I moved to New York for an internship with my stage management mentor. I worked with her as the stage management intern on “The Michaels” at The Public Theater, the off-Broadway theater where shows like Hamilton, A Chorus Line, Fun Home, and Hair originated. Not too long after that, one of the stage managers I’d just worked with recommended me to his friend looking for a rehearsal production assistant for the tour of The King’s Speech.”

Shewick came to Adrian. She got involved. She persevered. She graduated and now she is following her dreams thanks to the experiences that she has made at Adrian College. Shewich also mentioned that because of every single person at AC she would not be the person she is today. Shewich is an example of #GDTBAB