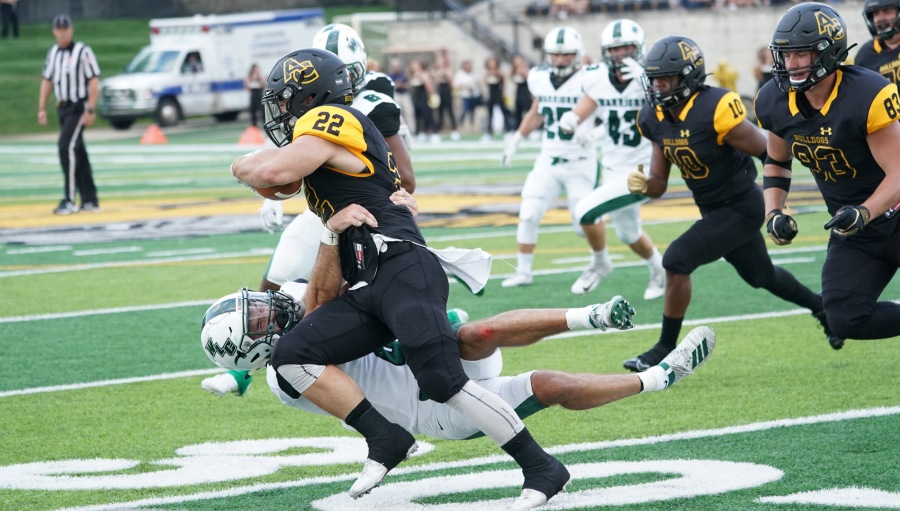 The Adrian College football wrapped up their 2019 homecoming game in stunning fashion on Saturday, as the Bulldogs took down visitors Wisconsin Lutheran 32-29 in double overtime.

A hot and sunny Sept. 21 was the setting for Adrian’s 2019 homecoming game against the Warriors of Wisconsin Lutheran. The Bulldogs were quick to establish the running game, totalling over 354 rushing yards against the Warriors. Senior RB Colton Randle was the first back to rush for over 200 yards in a game, averaging 7.7 yards per carry on 27 carries. Freshman RB Jerome Neal also pulled his weight, totalling 103 yards and two touchdowns. In the passing game, QB Jack Wurzer had a respectable outing, passing 18-34 for 197 yards.

The Bulldogs established running game, combined with the stellar passing game of Wisconsin Lutheran, made for a nail-biter that kept both alumni and fans on the edge of their seats.

With five minutes left to go in the fourth quarter, Adrian built a comfortable 29-16 lead. However, Wisconsin Lutheran scored a pair of touchdowns just over two minutes apart from each other to send the game into overtime.

Neither team was able to prevail in the first overtime, with the score remaining 29-29 as the game headed into double-OT. After a great stop by Adrian’s defense to prevent Wisconsin Lutheran from scoring on the next possession, the Bulldogs’ fate rested in their own hands. Sophomore kicker Cooper West kicked the winning field goal from the 26 yard line, giving the Bulldogs their first victory of the season (1-2).

The Bulldogs now have time to settle with a bye week, giving them ample time to prepare for their first MIAA matchup of the year against Kalamazoo on Oct. 5. The football team, and the campus, hope that the momentum from Saturday’s homecoming victory carries over as conference play begins.